As every first Sunday of the month, Diego Morodo, CEO and Founder of Offcyclers, and UrbanMeisters columnist and Art « Meister » brings to you the latest GREEN ART DIGEST. So you can learn about all the exciting things going on in the worlds of Sustainable Design and Art and tell all your friends about the cool discovery you made today (upcycled furniture today!)! (Don’t forget that last point btw!).

Today we want to introduce you to one of the most prolific, eclectic, extravagant and overall AWESOME sustainable artist (and designer) out there. Because if there ever was a prototype of the ideal ‘reuser’, ‘upcycler’, or as we like to call it “OFFCYCLER” , that would definitely be Rodney Allen Trice. He makes very slick upcycled furniture & decor pieces from discarded items.

An artist is born

Despite his eclectic style and his revolutionary creations, Rodney’s story is a story of resilience and truthfulness to one’s own vision. Soon after moving to New York City in the late 80’s as a young artist, Rodney took his savings and went down to the neighborhood of Soho to find some furniture for his new apartment. Back then, Soho was the place of galleries, vintage furniture shops and artist focused stores. Unfortunately the prices of the pieces were far beyond his reach, so he returned home empty handed.
But on the way back home, and after walking past some amazing finds in the trashes and containers during the following weeks, something struck Rodney’s mind. As he says, “I figured out what I had to do to make my apartment as fantastic and special as this city.” And so the legend began. His first piece, a red bathroom stall door, some copper pipes and valves and a piece of glass scrap were turned into his first creation, a coffee table that he still owns. The rest is history.
The truth is that Rodney’s creativity embraces any trashed material that can be given a second life. From old wok pans, to crutches, tires, broken fans, drums, hoses, umbrellas, buckets, propellers and the list goes on and on. And surprisingly all of them end up having a second life of their own as a piece of modern and functional art or design.  Thus his motto “Refitting the planet”.
For us at Offcyclers, Rodney is just a beast (with lots of love), and the world needs to really understand that he is and will be one of the references when it comes to the Offcycling Movement.
Luckily, we’re not the only ones to have noticed Rodney’s incredible talent. He was recently invited by Art Basel as an exhibitor, where he is planning to build a house out of aviation scrap, and the Times Magazine has named him one of the top 100 Green Designers of our era.

At Offcyclers we’ve selected some of Rodney’s pieces. These works show not only his adaptability and creativity, but also his constructive prowess when it comes to giving ordinary materials a second, and much better, life.

The first of the pieces we’ve selected at Offcyclers is the Rocker Tire Chair, or as Rodney likes to call it “ El Rocker de las Llantas Muertas” (The rocker of dead tires). Made with reclaimed tires and inner tubes found in the area of New York. Despite it’s rough look, this piece is surprisingly comfortable and smooth. The whole chair  feels like made from leather due to Rodney’s extenuating work polishing the tubes and tires to make them as soft and shinny as they can be. 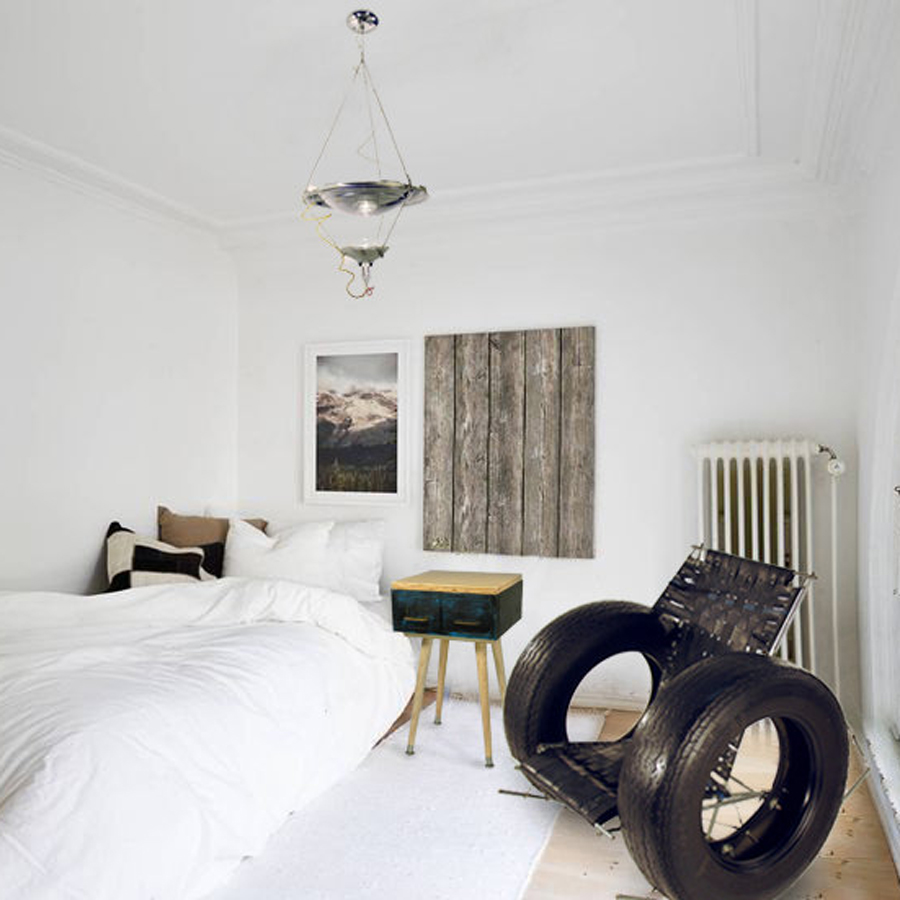 Have you ever used a wok pan to the point you had to throw it away? Were you by any chance in the area of New York? Then the next piece might’ve passed through your hands! Although we realize it’s quite unlikely what we really want you to understand is that the Beaker Wok Chandelier has been made using a real wok pan that was found in the trash.  From it, a set of three steel rods hangs down, and attached to them you can find a set of old laboratory beaker holders. If you ever went to science class in high school you know what we’re talking about. Finished with chrome-topped bulbs this piece is a statement of reusability. The Beaker Wok Chandelier is a unique chandelier that will illuminate your spaces and life with some elegant sustainability. 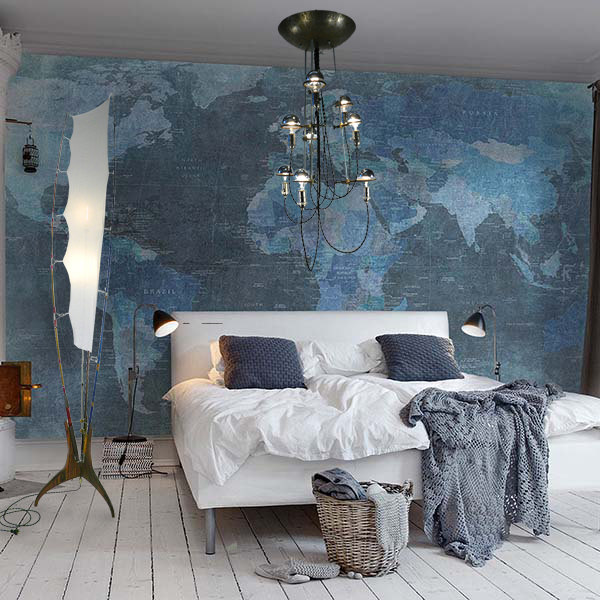 The two last creations of Rodney that we want to show you today come together given their close relationship with one another. Have you ever had to use crutches? I know I have, and not only once or twice. Yet something interesting about crutches is that although they become our most reliable ‘friends’ during a time of injury, and as soon as we recover, they end up being discarded and more often than not, in the dumpster.
Now, mostly made out of wood, crutches wouldn’t go unnoticed for Rodney! After years finding and collecting them, Rodney finally decided to turn them into something memorable. Enter the Crutch Table and the Crutch Bar.
For the Crutch Table, Rodney arranged the crutches in a star-like formation, which linked by a steel cable became a sturdy base for a glass panel. The result is the incredibly elegant dining table that you can see below: 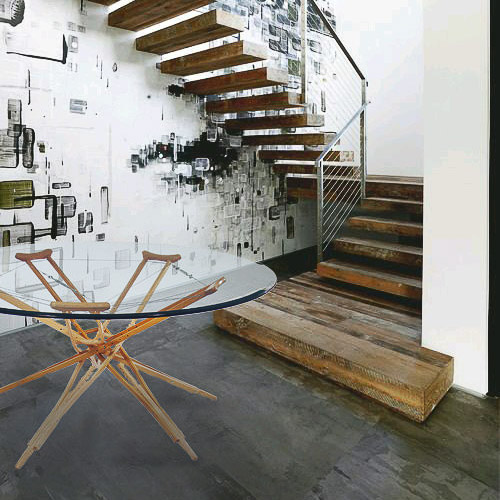 As for the Crutch Upcycled Bar Table, the first iteration was auctioned in Christies for The Cooper Hewitt: The Smithsonian Design Museum.  This pieces showcases a set of 8 crutches disposed in a completely different way than the Crutch Table and is made only on demand. 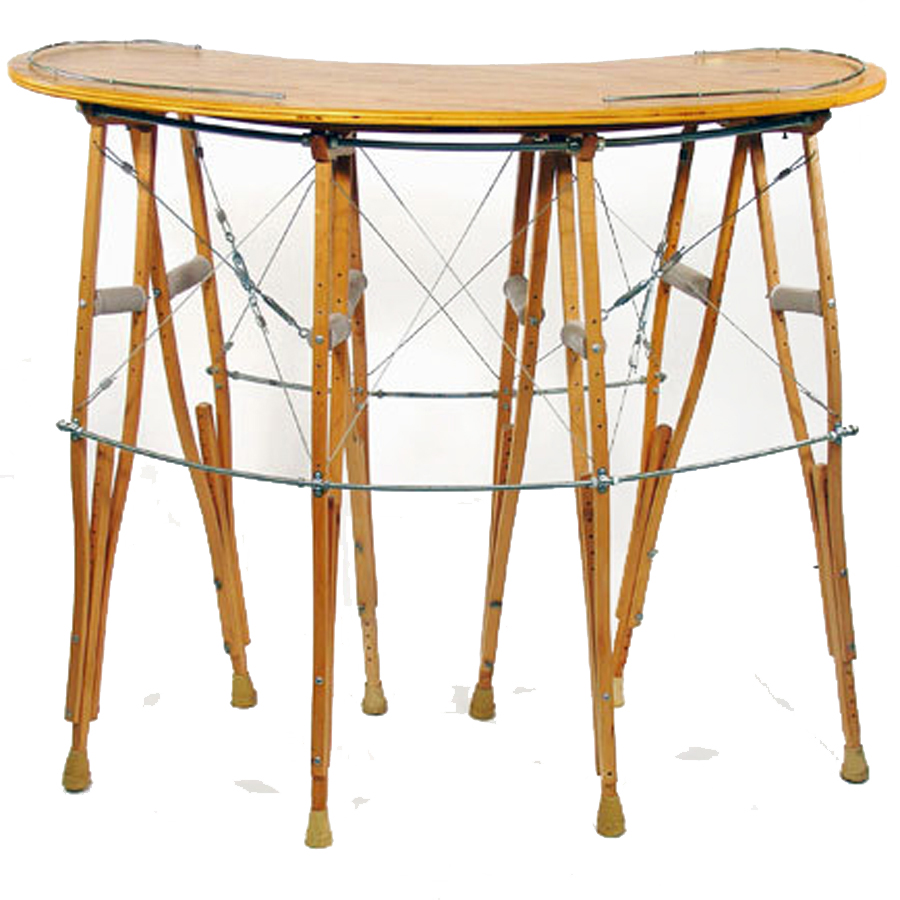 Although we could fill a whole book with the creations of Rodney Allen Trice, we will let you explore his work on your own too. To see more of his work, or would even want to commission a piece for him, just get in contact with us, or visit his Atelier Profile in the website of Offcyclers and learn more about Rodney and the rest of Sustainable Designers and Artists that we feature. We promise you won’t regret it!

Hope you have a great Sunday and now get out and enjoy the day! And if you want to contact us directly, please feel free to send us an e-mail at info@offcyclers.com