Remember how much fun it was to charge your mobile with the pedal power mobile charger? Human scale tech or what we ordinarily call human powered machines have been around for a while but the real deal would be for this technology to move from the odd mall or airport corner or your science room to becoming a viable mainstream alternative to fossil fuel energy. And that is what Tom of Reaction Sound System has been doing- making pedal powered sound systems for big music events and festivals so you can have some great eco-friendly fun! Wait did we just say eco-friendly and fun in the same sentence?!
We’re greenies. We’re not « alt » anything. We enjoy work, fun, family & friends like regular urbans. So why should we keep thinking green living and green practices come in the way of fun? Our feature today talks about Tom and his pedal power sound systems that give all of us party goers and music fest lovers the clean, renewable energy alternative to partying furiously! Presenting Tom and the Reaction Sound System journey.

Groove to the sound of pedal power music 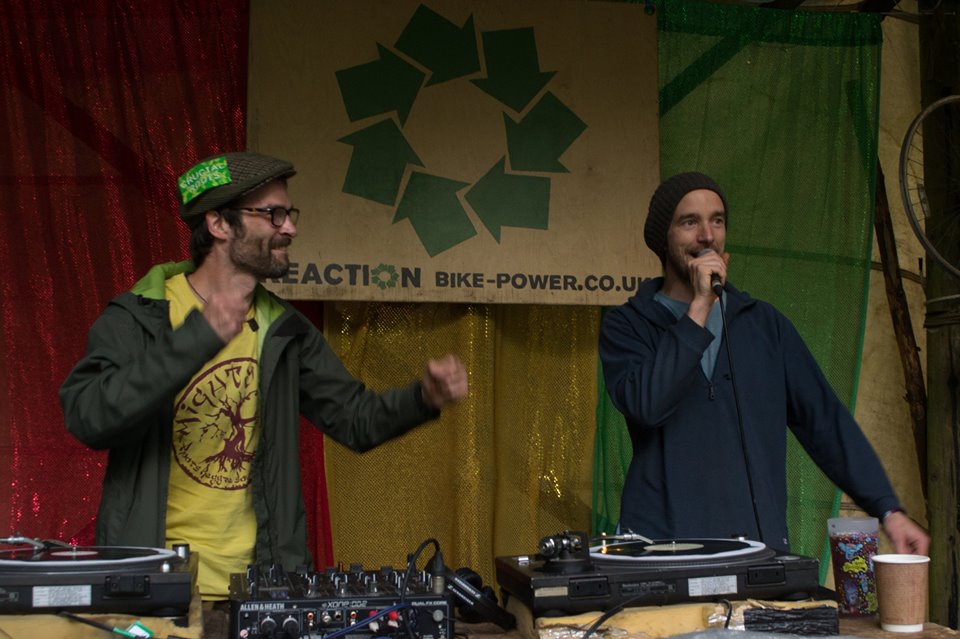 One thing we believe in very strongly- there are always solutions if you are willing to look. In 2007, Tom had been working on a loudspeaker design to use with small batteries for playing music while promoting “Grassroots” events. Grassroots was an environmental fund-raising event he had set up with friends, giving small grants and funds to local and international environmental projects and charities. Realising how little power was required to make a good level of sound when using the right speakers, Tom was looking for a way to create the energy required whatever the weather and for as long as was needed. Fossil fuels were out of the question of course. But the solution was right there. Since the early days of electricity and before there have been hand and foot powered devices from military radios to corn stripping machines. All you need is pedal power from a bike.
By 2009 Tom was touring festivals with a decent pedal powered sound system. At first doing most of the Djing and developing the skills to keep people involved using the microphone at this point it was a just fun drop in thing but soon everything had been rebuilt. Tom had learned loads from Martin Robinson at Purple Pro Audio in Leeds. Plus others, and redesigned the system to look something like how it looks now.
The new system included six bikes and was suitable for running a medium sized stage. Tom Recalls: “I remember when we first connected the whole thing together after 8 months building all the speakers and bike power generators. We played some music through the sound desk and got the system balanced and I was pleased how it sounded. Then I looked at the voltmeter and saw there was plenty of power still from the bikes. So I turned the sound system up.. still lots of power from the bikes.. so I turned it up again and again with no distortion. That was really a eureka moment because it was far louder and better than I’d ever imagined. It was in a friends back garden and we had about 300-400 people show up. Most people didn’t believe it was really pedal powered though. That annoyed me at the time but now I see it as a compliment. At one festival they had a dodgy batch of diesel which broke all the site power generators we were the only stage on the festival site with power, so it got really busy! That was a great moment for people power versus fossil fuels but even solar power has it’s limitations in bad weather.” 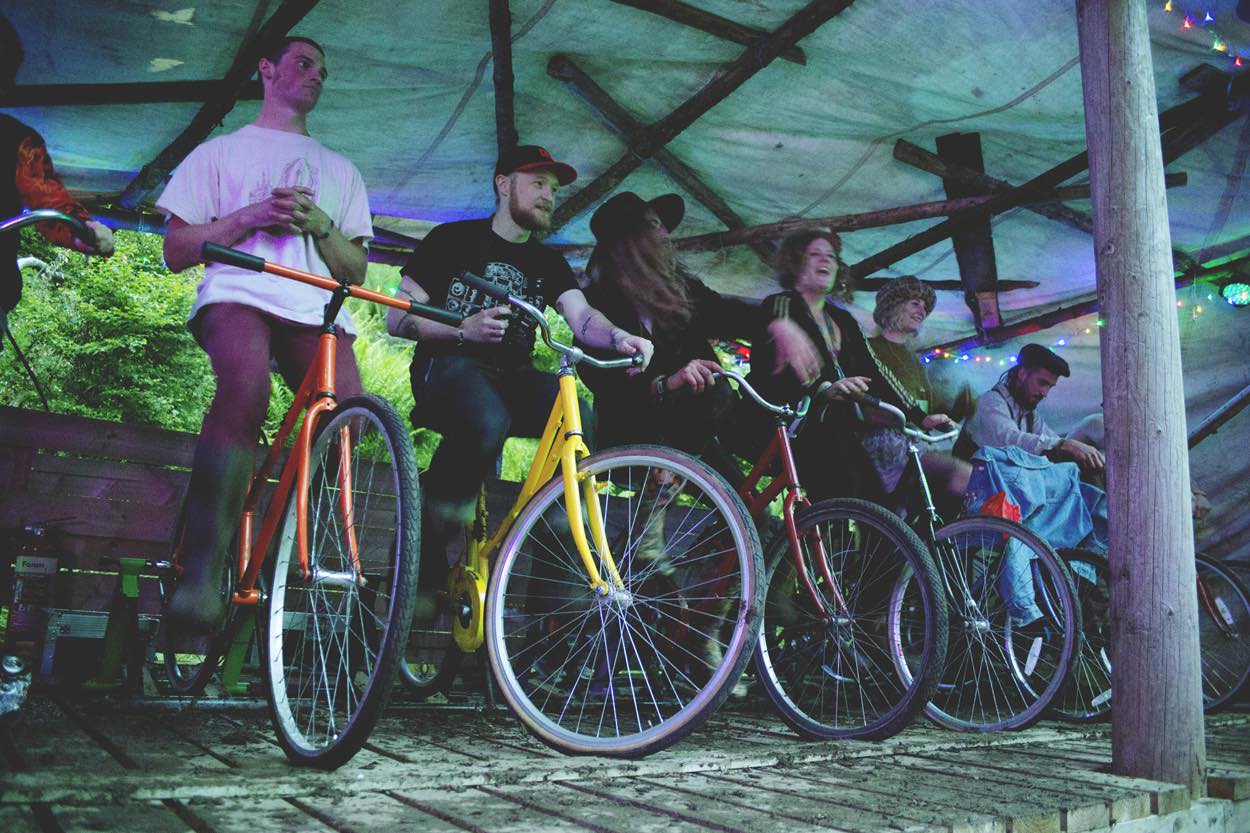 Tom and Steady, continued to tour with the pedal powered sound system- Steady being our expert in band sound engineering (and also a very good tradesman!). Much was learned about live sound in these early years with loads of bands and guest DJs playing on the sound.
Work began on a better way to show the cyclists and the audience what was happening with the electricity and when you had to pedal harder. This took a long time but eventually Tom had worked out how to create an LED bar graph which shows the power level of the system in a 20 segment display. The lead acid battery we used was replaced with capacitors which store and release energy much more quickly and efficiently, amplifiers and cabling were upgraded and more speakers were built. This was when it got serious as Peter (Jedi Pete) Tatham, Cam (High Lassie) Thomas,  Emlyn (Dj Gremlyn) Hagen, Val (v-ital) Ragni, Naomi (no.me) H-B, joined Tom (reaction sound) Evans and Nick (Dj Treekle) Morgan to making a deadly Dj crew with the motto: Killing sounds in a post-fossil-fuel-apocalypse-style. Sharing the workload during festivals and busy times, artist liaison and stage management, plus behind the decks adding their unique musical influence to the show. The crew and the system can be seen at the Boardwalk Reggae/ Dub arena in Eden Festival or at Northern Green Gathering, Equinox festival, Shambala and more. 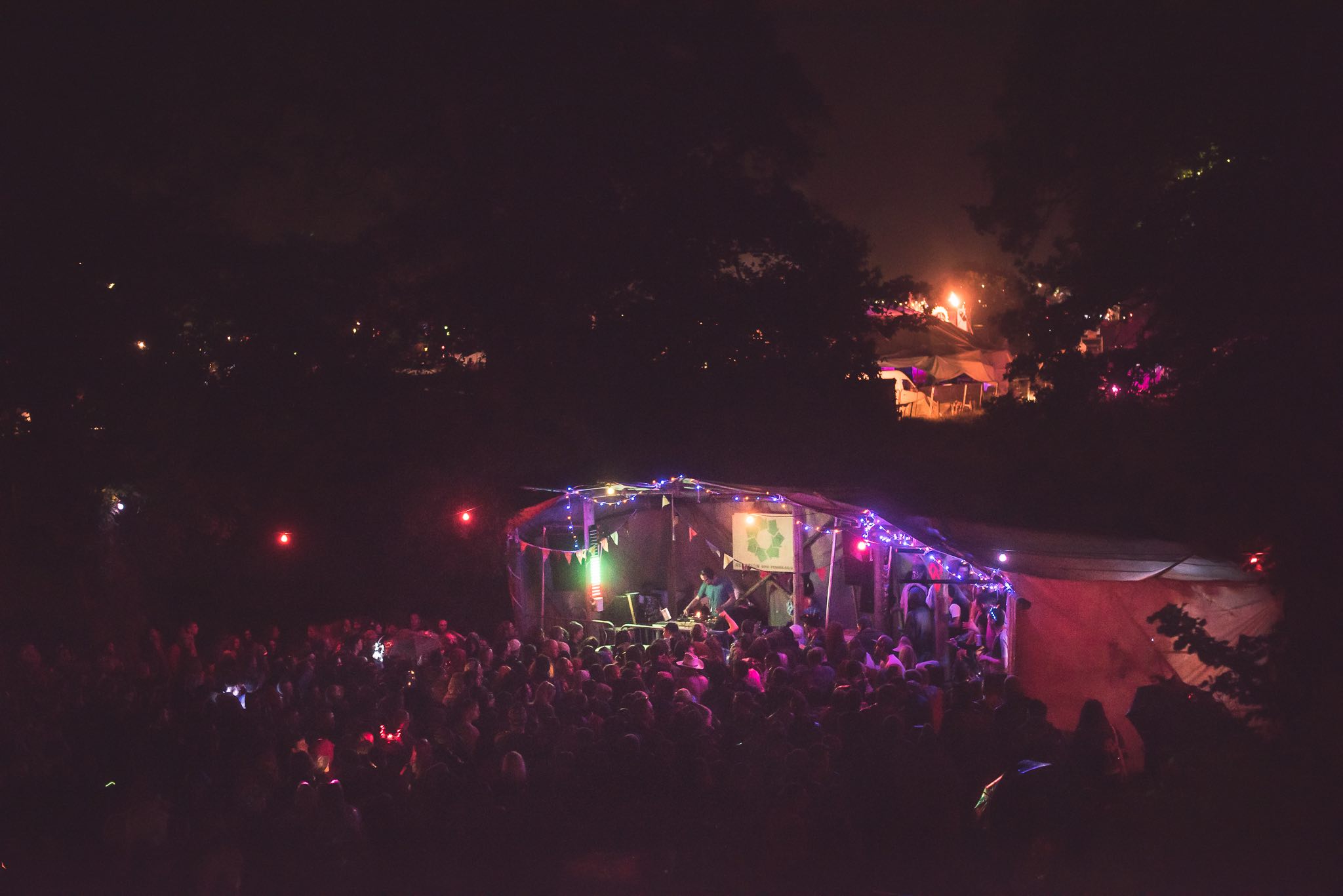 Originally called Chain Reaction Power Systems, they became un-chained in 2012 when Reaction Bike-Power was born. Reaction Sound System can work on the mains or solar power so they have separate accounts on social media for the soundsystem and the bike power. Reaction is still run by Tom who still builds all the equipment hosting, sound engineering and Djing at events.

Tom’s vision is not just a sound system using pedal power but go beyond. They also do a cinema, car racing track, inflatables, schools educational demonstrations, energy awareness demos, pedal power competitions, and commissions.
Tom also builds equipment for other organisations to hire and buy. “You have to follow the money a bit. Not in a greedy business man way but I always feel that I’m one step away from bust. There is no job security and and no safety net. Things do go wrong. Fortunately we have never had a terminal technological meltdown at an event but for the business when the Van fails its MOT test (UK road safety) and needs £1000 worth of welding you can’t afford, you just have to get welding. Just like when the website gets hacked you have to rebuild it and move on. Sometimes it feels like swimming against a tide but I think a lot of people feel like that in the UK. I’m proud we have survived so long in this business and it does get easier, you get better at it I suppose.” 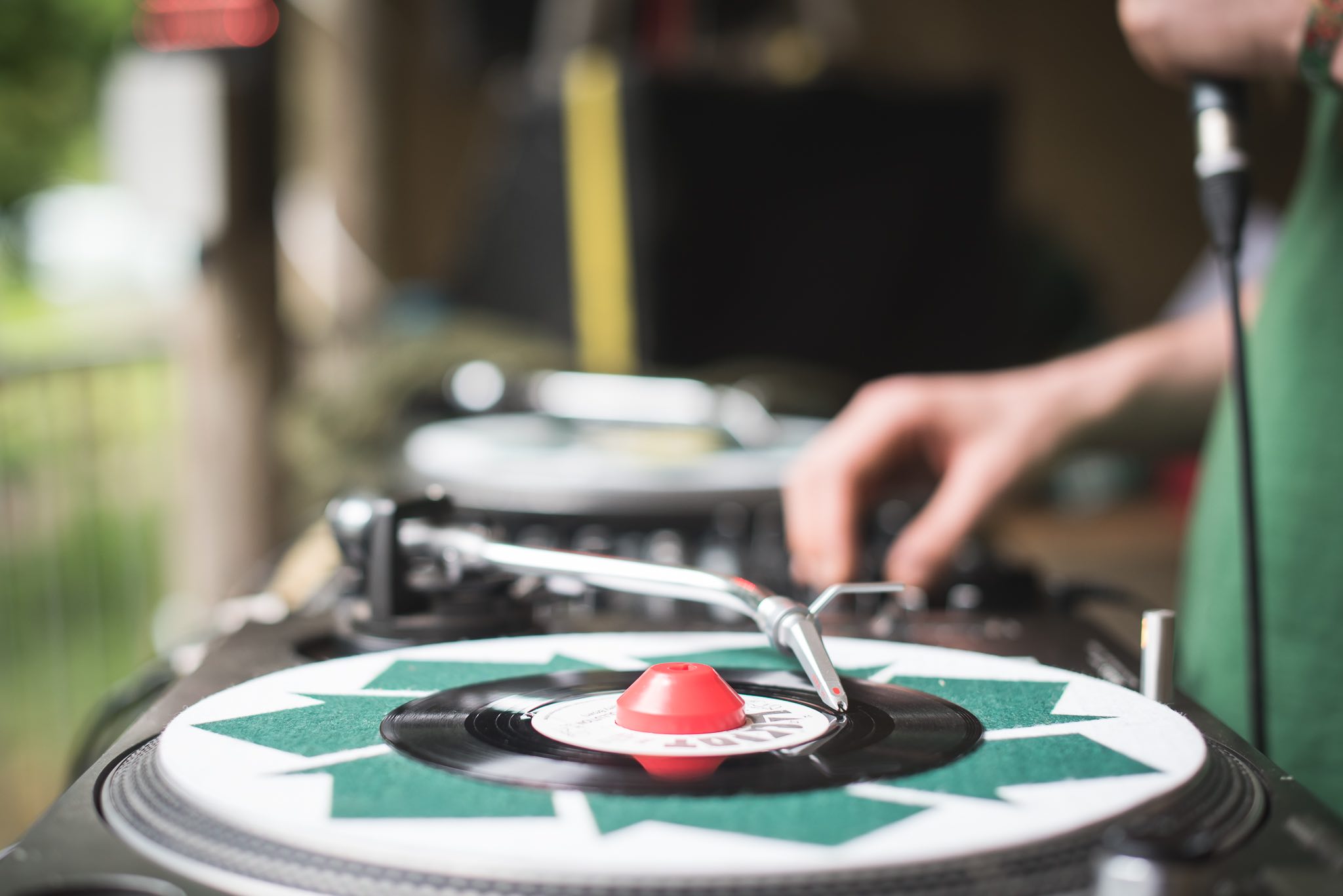 Tom says: “The challenge for us with the sound system has been breaking out of the toy/gimmick category. Promotors are often very nervous and not always technically minded. If they haven’t seen us before they will often worry it won’t be loud enough. Many people (who should know better) use maximum power output to measure how loud a sound system will be. This ignores the  loudspeakers and how efficient they are. When you consider how loud a good gramophone can be with no amplifier at all, just the movement of a needle on a record it’s easier to see how a good efficient speaker can be louder and clearer with 1 watt than an inefficient one is with 16 watts! Our regular clients know it works and we are slowly getting more recognition.”
In the future Reaction plan to build more and bigger loudspeakers and are working on a fourth generation of bike generator. Their vision is an up-sized and improved system for large stages and so they will keep working to make it as good as it can possibly be, adding more power monitoring and more interactive elements as they grow.
You can check out the incredible work being done by Tom and his team here:

Sure its a far off way to powering Tomorrow land with bikes but with tech advancement the zeal of Tom and his team, it’s not mission impossible! Green fingers crossed! And in the meantime here some more from UrbanMeisters archive on green energy practices and products.
To get you started, we shared practical and handy tips on energy saving by UrbanMeister Gareth as well as an easy to understand infographic explaining the benefits of solar power. We have also presented smart devices like Luko and Quilo that cut needless usage of energy and reduce wastage thus increasing your savings. Get started on green energy practices and consumption already! 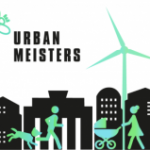