Dakota Access Pipeline has become a green flash point for several months with thousands protesting the construction of the controversial pipeline. And the latest development is a significant victory for protestors who are a mix of environmentalists, human rights activists and Native Americans because Obama administration has halted the construction of the pipeline till an independent environmental review is done again. The Department of the Army also announced that it would look for alternatives routes for the pipeline. The $3.7 billion project which is already 75% complete is pitched to change the US domestic crude oil supply chain and have a huge impact on the local economy. But the project has hit a serious human roadblock and protestors consisting of an array of tribes, activists and environmentalists have been camping for months at Standing Rock Sioux in North Dakota. The Dakota Access Pipeline protests are a collective fight against the US subjugation of Native Americans rights as well as environmental issues of fracking and climate change. The project has been given the ‘green’ signal by authorities but there are some serious concerns about the ecological impact of the pipeline. Let’s examine the green angle thoroughly.

The pipeline is an ambitious project stretching 1172 miles from the crude oil rick Bakken area to Illinois directly from where it can make its way to refineries across Midwest, East Coast and the Gulf.  The oil potential of the Bakken area has boomed in the recent years but the transport infrastructure has not kept pace with this development- few pipelines in the region to keep up the demand. Drillers in the region have been using traditional methods of transfer by road and rail to refinery markets in the US which is actually much costlier, very unsafe and accident prone and most importantly has a huge carbon footprint. If the Dakota Access Pipeline comes into operation it will transport an estimated 470,000 barrels of crude oil a day- which is approximately half of Bakken current daily crude oil production.
Well that’s just peachy right? So what not so green you ask. Dakota Access Pipeline has been fracked with controversy since it began construction in 2014 starting with farmers in Iowa protesting it’s construction to the route being altered from Bismarck to Standing Rock when the resident community in the former region protested against it. 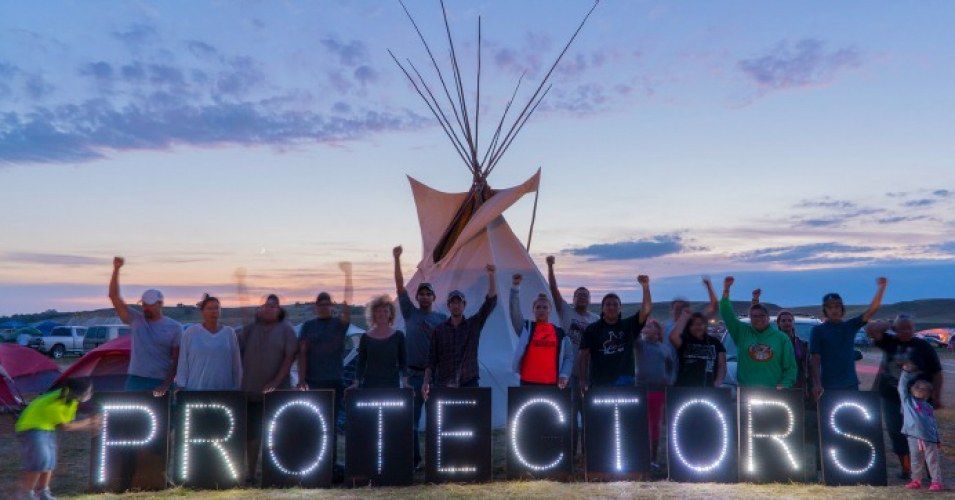 The current stand-off is primarily from the Native American community on reservation land at Standing Rock Sioux on two accounts:

The resident tribe of the region is worried about the environmental impact of the pipeline in case of a leak since a huge part of it will be under the Missouri River which is the main source of water supply of the community.

The pipeline is also allegedly running across sacred burial site of the native tribe. The land is actually not a part of the reserved area but the tribals have sited historical subjugation of their rights to land as a major contentious issue.
Water contamination is not an unfounded concern at all. If the pipeline were to leak or burst, it would send oil deep into the Missouri River which would be disastrous for not just this region but the whole river bed and eco-system. Contaminated water is a huge health risk. The Worcester Polytechnic Institute did an extensive study of the effects of three major oil spills and the report points out an increased risk of cancer and digestive issues in communities exposed to water contaminated by oil spills either directly- drinking water- or indirectly- eating livestock exposed to contaminated water. Using this water for other purposes like washing, bathing etc also showed higher results of skin problems, ranging from mild rashes to severe and lasting eczema and even malignant skin cancers.
With such huge risks, such projects are done under after intense legal reviews and independent surveys. And the Dakota Access Pipeline too underwent the required legal and environmental scrutiny by the Army Corps of Engineers. But the protestors claim that is review was not done properly and without taking the Native American community input and flouting many norms of the Clean Water Act, 1972. In fact, Standing Rock Sioux has filed filed a lawsuit against the Army Corps of Engineers on these grounds. 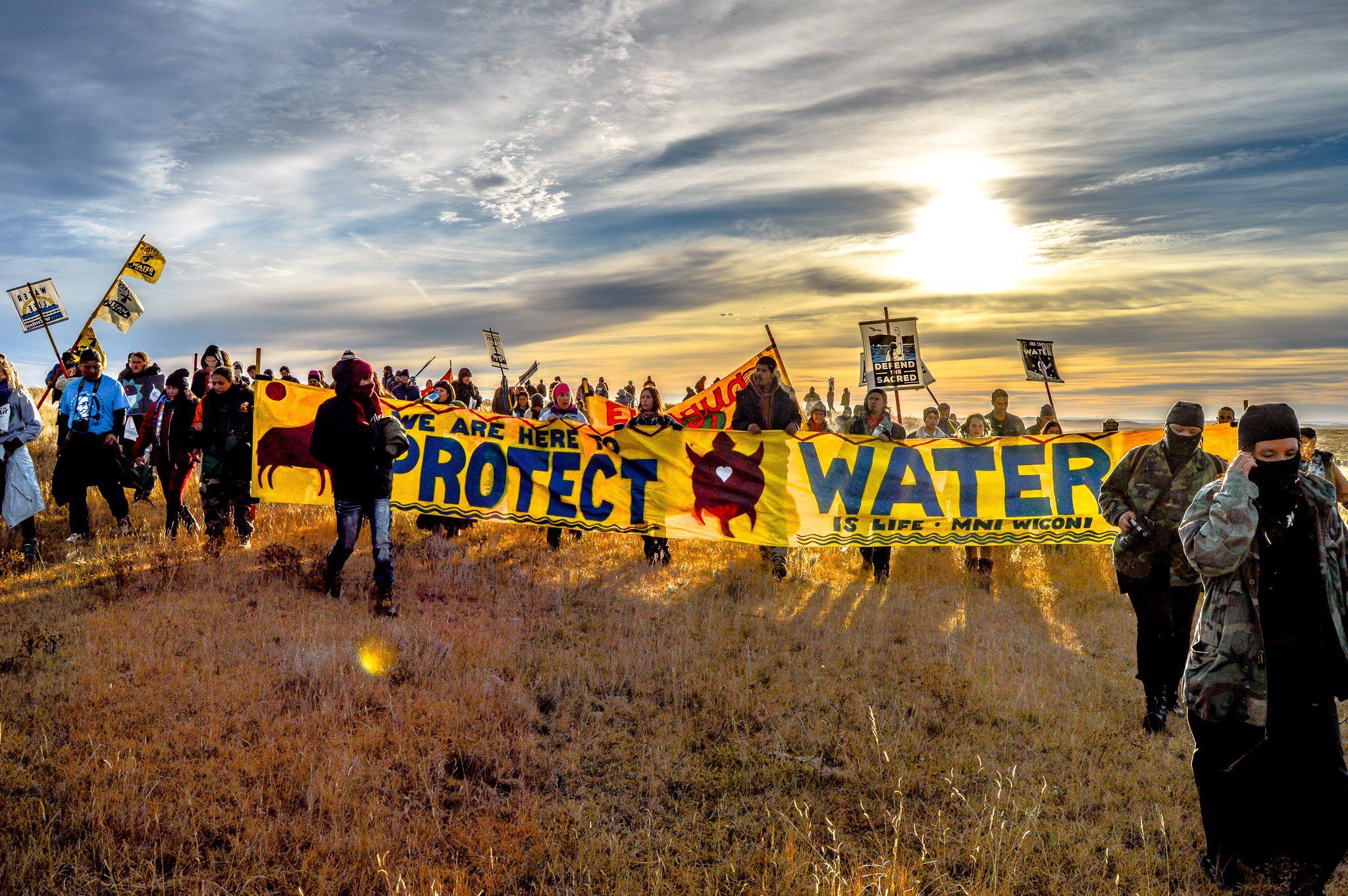 Dakota Access Pipeline developer Energy Transfer Projects is calling the water contamination fears « unfounded ». Kelcy Warren, CEO of the company recently defended the project calling on its significant economical impact. The company claims that the pipeline will ensure a more direct, cost effective and safer passage of crude oil to American markets to support domestic demand. It is a fact that the pipeline will reduce the dependency on rail and road transport which is not only extremely expensive but also has a huge carbon footprint. The project also promises to be environmentally responsible in construction using the most advanced technology, materials and monitoring systems to ensure safety. Read the Dakota Access Pipeline commitment to safety.
Assuredly, road and rail transfer is more accident prone but pipeline leaks and spills are not exactly a distant possibility either. The pipeline is a permanent solution the long term ecological damage, no doubt, but water contamination due to spillage and leakage is not an unfounded environmental concern at all. Looking at statistics alone should tell us that. According to Pipeline and Hazardous Materials Safety Administration Data obtained by AP, more than 2000 ‘significant’ oil pipeline accidents have occurred since 1995. From 2013 to 2015, an average of 121 accidents happened every year! So the fear is real and needs to be addressed.
With so much at stake, the demand for review of the Dakota Access Pipeline- one which is thorough and transparent- is a perfectly legitimate one and we support it with all our green hearts. The protesters stood strong even though federal pressure to evacuate was intense. The outgoing Obama administration has given a lot of green hope to the movement against the pipeline but how far will the ruling of this outgoing government help is anybody’s guess. President elect Donald Trump who will start office in a little longer than month has made it ample clear that he supports the construction of the Dakota Access Pipeline in it’s current avatar. We will keep our green roving eye on the latest developments and report to you.