GREENWASHING goes hand in hand with GOING GREEN in today’s consumerist world. It’s always been our endeavour to expose greenwashing by critically evaluating brands and practices claiming ‘sustainability’. Well you know how every brand claims to be ‘eco’, ‘green’, ‘sustainable’- using these words more as marketing spiel than having actual substance because environment awareness grows strong among consumers. But greenwashing is not relegated to just brands and products. It is a well orchestrated marketing machinery oiled by lifestyle trends that have been propagated in the name of ‘sustainability’. UrbanMeisters.com aims to help you expose these green lifestyle myths so that we can truly practice eco-living. And in this we are joined by partner eCo2 Greetings. The sustainable company is an e-card platform that works with the American Forests Global ReLeaf campaign to plant 10 trees with every order, with almost 90,000 trees already planted! Together we expose 8 greenwashing myths on sustainable living.

There are plenty of well-known tips out there to help you reduce your environmental impact; don’t leave the water running while you brush your teeth; shower instead of taking a bath; recycle your waste; share your car journey to work with a colleague.
However, amidst growing concerns about climate change, there are also plenty of products and practices that have been given a ‘green’ status which unfortunately don’t quite live up to the hype.
With products being marketed as eco-friendly to consumers every day, it can be a real challenge to spot greenwashing and separate the genuinely low-impact items from the ones that are doing more harm than good.
Here are just 8 modern products and practices to be aware of: 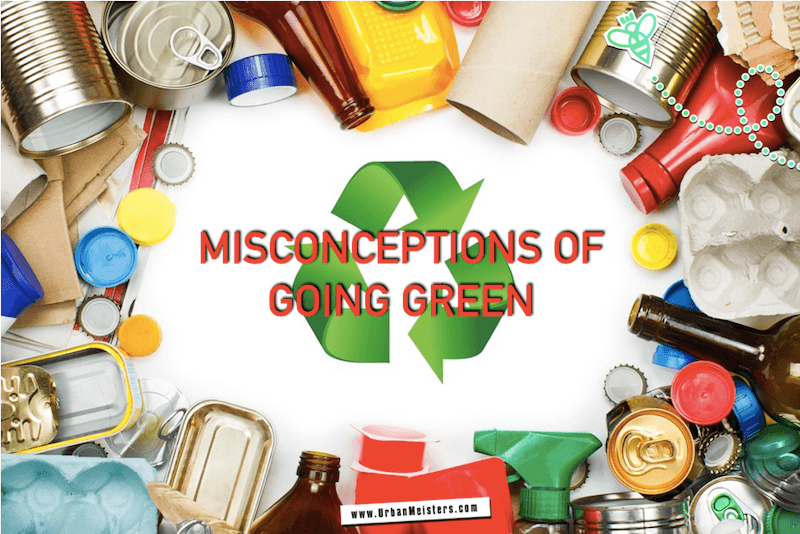 Biofuels are derived from biological sources, most often from crops like wheat. They are usually blended with fuels like gas and diesel which we commonly use to fill up our cars.
Because the original plants absorb carbon dioxide whilst they grow, biofuels have enjoyed a reputation for being carbon-neutral and not a contributor to global warming.
However, new research has found that while the growing crops absorb CO2, they only absorb 37% of the CO2 that is released into the atmosphere when the plants are burnt, meaning the use of biofuels actually increases emissions quite significantly.
So what’s the alternative to this greenwashing?
Renewable energy alternatives like solar panels and wind turbines are increasingly competing with the likes of coal and natural gas, with the costs predicted to fall by at least 26% and as much as 59% between 2015 and 2025.
Although the production of items like solar panels requires the consumption of resources, the use of sunlight can produce 200-300 times more usable energy per hectare for vehicle transport in comparison to bioenergy.

Light Emitting Diodes, or LED lights, are the latest technology in energy efficient lighting, using around 90% less energy than incandescent bulbs and decreasing greenhouse gas emissions.
Sounds great, right? With Goldman Sachs predicting that 6 in 10 lightbulbs will be LEDs by 2020, you’d certainly think so.
However, LEDs seem to have a negative effect on humans and wildlife due to how the blue spectrum of light affects us.
Insects are more strongly attracted to them, for example, and this attraction can be fatal, causing more flies to be eaten by predators, disrupting food chains and damaging local ecosystems.
Not only that, but blue light from LEDs is particularly effective at lowering our melatonin levels. While this is necessary during the day, exposure to it at night affects our ability to sleep, with research showing that it may also play a role in the causation of cancer, diabetes, heart disease and obesity.
Unfortunately, LEDs remain the most energy-efficient choice, so keeping them switched off at night and the adoption of timed and automatic lighting solutions will have to do for now.
But what else could be our alternative?
We could perhaps see the return of softer, more natural traditional lighting after MIT scientists discovered a way to make the incandescent bulb even more energy efficient than LEDs.

Coffee shops have enjoyed a huge boom in popularity over the past decade. Unfortunately, while people are grabbing their quick energy hits, the number of disposable cups thrown away has exploded to around 5,000 every minute – that’s 2.5 billion a year!
In a well-known greenwashing exposé driven by waste-hating celebrity chef Hugh Fearnley-Whittingstall, the UK was recently shocked to learn that just 1% of its coffee cups are recycled despite major coffee chains claiming to use « recyclable » cups.
As it turns out, paper cups are not actually made of just paper but include a layer of polyethylene, meaning they cannot simply be recycled with paper or cardboard.
As with many one-use disposable items, the solution to this problem is going to come from growth in the reusables market.
So what’s should be your step?
While the major coffee chains may not be offering amazing incentives for you to go reusable just yet, it’s becoming more popular to purchase your own reusable coffee cup and asking that vendors use that instead – look for BPA-free versions to help reduce your toxic load.

The perception of organic farming is that it uses natural methods of crop rotation and weed control, maintaining nutrient levels whilst using less energy, causing less nitrogen leaching and emitting fewer greenhouse gasses, nitrous oxide and ammonia than conventional farming methods.
However, organic crops requires much more land to yield the same amount of produce, meaning you get the same amount of greenhouse gasses and about 10% more nitrous oxide, ammonia and acidification.
So what’s the actual green alternative?
To really minimise your environmental impact, scout out your local farmer’s market whether the produce is organic or not, as they’re often cost competitive with grocery chains and less CO2 will have been emitted through transport.
Not only that, but as local food is fresher, it will have spent less time in storage and thus be higher in nutrients – if you struggle to find good quality local produce, fruit and vegetables that were frozen soon after picking actually come up trumps for nutrient density.

Unlike hybrid vehicles that still require petrol or diesel, electric cars are powered by electricity and can be recharged from your own home.
Believed to have a smaller environmental impact than conventional vehicles, electric cars don’t have a tailpipe, and therefore provide a real impact in improving air quality.
However, an electric car is only as clean as its electricity supply; if your energy comes from a power plant, for example, you’ll be creating more emissions than a hybrid car’s tailpipe.
Lithium in an electric car’s battery, along with other rare metals, also often have to come from environmentally destructive mines.
In an ever-connected world, getting around without a car can feel like an impossible task.
Cycling, of course, uses no fuel, with bicycles taking a lot less energy and resources to make than a car, with no need for toxic batteries or motor oil.
There’s also public transport and carpooling. However, sometimes these just aren’t feasible solutions, so it may reassure you to hear that the U.S. is starting to favour the burning of cleaner, natural gas to produce the majority of its electricity, abandoning coal and producing less CO2.
There are even a growing number of energy suppliers you can switch to who actively use and invest in renewable energy sources and, in some cases, actually work out cheaper than the major energy suppliers.

Bamboo clothing is generally viewed among “green chic” circles with much less embarrassment than fabrics like hemp, traditionally favoured by less trendy, “dirty hippies”.
The bamboo plant doesn’t need pesticides to thrive and is easy to grow organically and sustainably, and in recent years it’s become a popular choice for clothing and other textiles.
While marketers will tell you that bamboo fabric is made from the natural pulp of the bamboo grass, the manufacturing is actually a heavily chemical process with some pretty toxic byproducts.
The end product isn’t really bamboo at all, with approximately 13 different toxic solvents used to turn the bamboo into fabric.
Natural, traditional fibres like cotton or hemp have their merits, while wool is another excellent option – although be aware of animal welfare issues.
You should also keep in mind that garments may have been processed in several different countries before making their way to you, significantly adding to your carbon footprint.
So what’s the green choice?
A great way to reduce your wardrobe’s environmental impact is to buy secondhand, making sure to pass on any clothing that doesn’t fit or suit you anymore in return.
Capsule wardrobes are also becoming hugely popular, where you own a small amount of clothing that you can mix and match endlessly to suit almost any occasion; remember that fashion is fleeting, while style is timeless.
It also helps to think beyond “Reduce, reuse, recycle” and add “Refuse and repair” into the mix – most little snags can be easily patched up, and do you really need that new top? Really?

Recycling helps many people to feel better about their consumption, reassured in the knowledge that they’ve kept products out of landfills and oceans whilst conserving resources and energy from producing new products.
The process of recycling, however, can be harmful to the environment. When it’s melted down, not only is the energy generating carbon emissions, but volatile organic compounds (VOCs) are released which are harmful to plants and animals.
So what would be the best green step?
Going back to our new “Refuse, reduce, reuse, repair, recycle” mantra, the most effective way to reduce plastic waste is to not create it in the first place.
One of the easiest ways you can cut down on your plastic consumption is to stop buying packaged foods.
Full of additives, preservatives, colourings and artificial flavourings, these foods are doing your health no favours, whilst in comparison you’ll see very little plastic packaging covering fresh, whole foods in your local farmer’s market (grocery stores, not so much).
In addition, the next time you go to replace your plastic Tupperware/chopping board/water bottle etc., consider investing in their longer lasting, less toxic counterparts in materials like glass, which unlike plastic is endlessly recyclable, or ceramic and stainless steel.

Biodegradable household cleaners, soaps, dishwasher and laundry detergents are just a few examples of green products that are now available on the market.
Green products are often advertised as being free of toxic chemicals and byproducts, and having been made from recycled or sustainable materials.
But many manufacturers exaggerate their « eco » credentials, claiming to be green through advertising to simply capture concerned consumers rather than actually minimising their environmental impact- a practice known as greenwashing.
So how do we open eyes to this greenwashing?
Get clued up on ingredients and investigate a company’s products by reading their labels, research them online and ask them to substantiate their claims – genuinely eco companies are always more than happy to help educate customers on how their product is good for the environment.
It can be helpful to look into eco/bio certifications; start by researching the criteria for each body you find and ask yourself whether you agree with their standards before seeking out products they’ve accredited.
Bear in mind that many smaller companies can’t afford to get certified, so another way to spot good companies is when their products contain a minimal amount of ingredients – plus, this makes it much easier and quicker for you to research each one!
A final way you can control the chemicals you’re using around the house and on your body is to make it yourself.
There are hundreds of websites out there offering DIY alternatives to commercial products, saving you the hassle of keeping tabs on green manufacturers whilst saving yourself a lot of money at the same time.

UrbanMeisters, we hope this feature in partnership with eCo2 Greetings was insightful in helping you evaluate green lifestyle trends that have gained momentum. Information is the key to green action so keep your eyes open and make the smart green choice not swayed by any greenwashing.